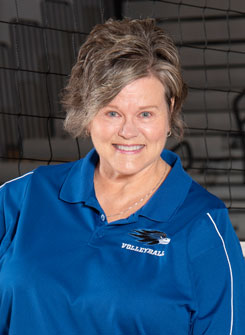 Patty has been coaching high school volleyball for 18 years.  She coached 1 year at Mid-America Nazarene College before coming to ONW and has also coached club ball for several years with area clubs – Dynasty and PVA.  Her PVA 12’s team won 2 national qualifiers earning a bid for nationals.

Patty has been with ONW since it opened except for 3 years which she became the head Varsity volleyball coach at Shawnee Mission East.  She took that program from last place to 3rd at State in 2016 with a record of 31-10 and was Sunflower League Coach of the Year.  SME had not placed at State in over 20 years.  Patty returned to ONW in 2017 to coach JV and assist Varsity and now full time Varsity Assistant Coach.

Patty has been married to Chuck for 37 years, has 2 grown children, 3 grandchildren, and a hound dog named Punkin.